Sorry for the bad joke of words in the title, but the Contest #1 consists exactly into that.

Finally, Tour Down Under organization decide to improve the route drawing a route that suits better the climbers like Quintana but is also balanced to permit to compete also to time triallist like Dumoulin.

You are called to redesign Tour Down Under making an harder and better route. You have to keep the format of a six day World Tour race with an end in one of the biggest city of South Australia. You can choose for the finish one between Adelaide, Melbourne, Canberra and Sidney. Of course, you have to insert a time trial in the route.

You must submit your routes in this topic submitting the link. As stated in general presentation, you can submit from 1 to 5 routes. You can use this topic also for asking the question - we can answer question about climb / road / finish praticability but we won't answer to anyone's questions in private, only in this topic.

Please ALL use a "Tour de France" style. Choose the one you want between the TDF Family (Tour, Nice, Liege, Roubaix etc) but the important is that everyone uses the same style so will be easier to compare the races between users

You can also add your climbs in the presentation in the topic.

My second Tour Down Harder: if the first was more Dumoulin-ophile, with lower mountains and longer time trial, this one is more Quintan-ophile, with a shorter time trial and higher mountains. The tour starts with a prologue in Melbourne and ends with a circuit in the federal capital Canberra. The fifth stage finishes on the top of the Mount Kosciusko, Australia's highest elevation.
Top

This tour takes place in Melbourne. Even if it is "harder", I think it is balanced becouse it offers all kinds of segments. in fact there are 2 completely flat stages, 2 mountain stage, a long time trial and a hilly stage.I chose to not put into the tour HC climbs couse it is the first race of the year and famous climbers aren't "in fit" (in forma) yet. Anyway the 2 1°cat. climbs are so hard. the first one is made by a gravel road and the second one is really long and steep. I chose wide streets for the starts, Sprints and Finish lines. I hope you Will enjoy the route and I apologyze for my grammar mystakes. *I left a comment for each stage.
here there are sonme key points of each stage:
1° stage
the start:

the shrine of remembrance
2° stage
the Circuit: 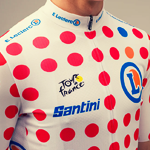 Hello. This is my route for the contest Tour Down Harder
maps/tours/view/8367 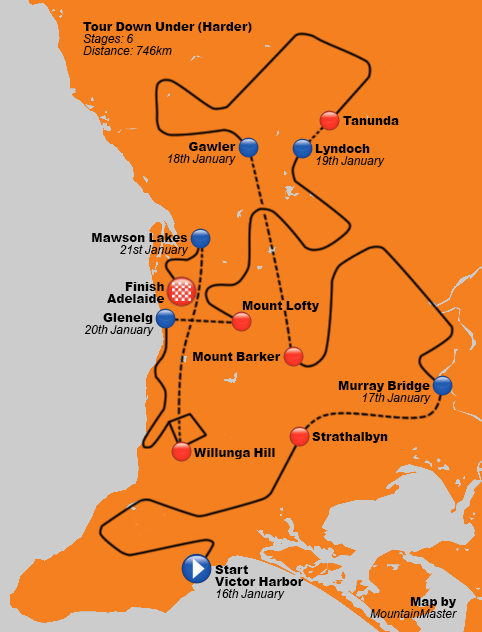 In the 20th edition of the Australian cycling race Tour Down Under, the organizers decided to improve the route. The objective is to attract the best riders of the world to Australia.

The tour will stay in Adelaide and South Australia, ending the rumors that TDU could be transferred to Melbourne or another Australian big city. «South Australia and Adelaide host the Tour Down Under since their first edition in 1999. The sponsors are happy here so we don't plan to move to Victoria or New South Wales. This land have conditions to host a great race» said the organizers during the route presentation in Adelaide.

The Tour Down Under will start in Victor Harbor and will go through the Fleurieu Peninsula's lands. The route has two KOM sprints and one intermediate sprint before a flat finish in Strathalbyn.
Probably will be a sprint finish except a sleepy peloton let the breakaway win.

The second stage will start in Murray Bridge. In the first kilometers there is two intermediate sprints before the 3rd category KOM near Palmer. In that climb the cyclists can see the Bear Rock, a local tourist point.
With the last kilometers in flat, probably we will get a new sprint dispute in Mount Barker. The stage Gawler > Tanunda isn't new in the Tour Down Under. Erik Zabel won the stage in 2000 and Cadel Evans in 2002. Now probably with a different route the stage will be mostly flat, with 2 intermediate sprints and a KOM in the finish.
But with the last 3km in a 4.4% average slope it's probably that riders like Peter Sagan and Michael Matthews will dispute the stage win. The stage will end near the Barossa Sculpture Park. And the battle for the general classification will start. This stage start in Lyndoch and has a total of 4 KOM sprints and 1 intermediate sprint. Part of the city of Adelaide will be the "division" between the two 2nd category KOM. The stage will end in the Mount Lofty Summit after 12km in 5.1%.
The winner of the stage will probably dress the orange jersey but he can't still celebrate because the next two days will be decisive.

This stage will start in Glenelg and will go to Snapper Point through the coast roads of St. Vicent Gulf. After the intermediate sprint the cyclists will enter in McLaren Vale and then they will climb the Willunga Hill three times in a circuit of about 27km.
Will be the last opportunity for climbers win time in the GC. Can Richie Porte win in Willunga Hill one more time?


Images doesn't work, you won't get points for presentation until you fix them
Software Engineer, Cycling Fanatic
Top

Hello everybody from Spain.Here is my Tour Down Harder.(I will use Google Translate)

maps/tours/view/8134
I have decided to maintain the location of the race in Adelaide but with a more varied route than that seen every January in the race. The first stage will be an ITT where specialists can create differences with climbers, the second stage seems ideal for sprinters but it has a complicated ending, the third stage will run by the sea so it could blow wind and form fans and also near the goal we will have a level that could cut the sprinters, the fourth and fifth stage will be the ones that decide the general where in the fourth stage we will have a half mountain stage with a second port included while in the fifth we will have four steps over Wiilunga Hill being this last final step of the stage. The sixth and final stage will be a circuit in Adelaide of km to which 5 laps will be given. 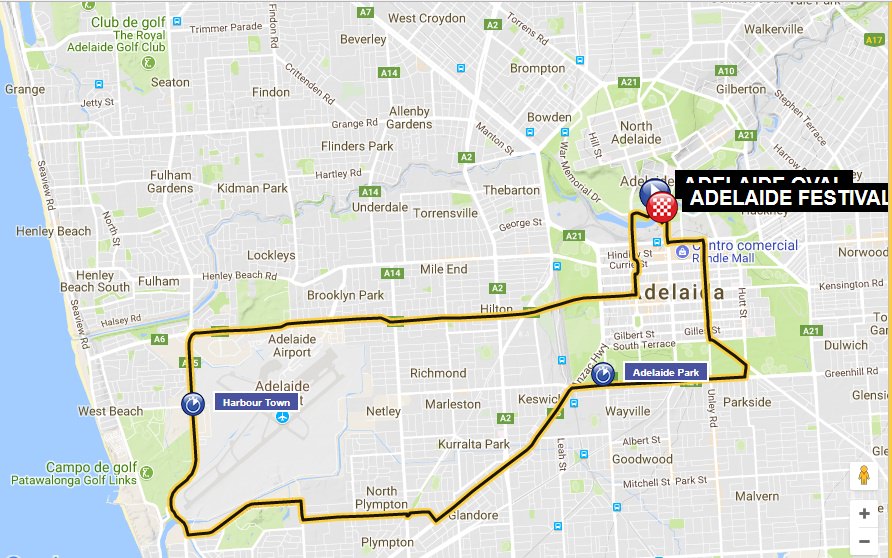 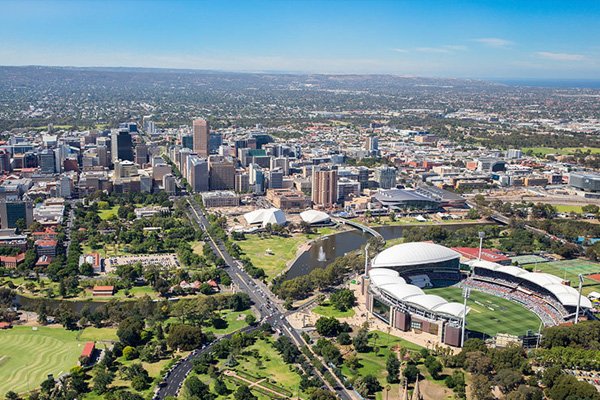 Second stage of the race where we will only have one third port and the rest of the stage will be level so that there is an arrival to the sprint but the narrow end of Whispering Wall could avoid a massive sprint. 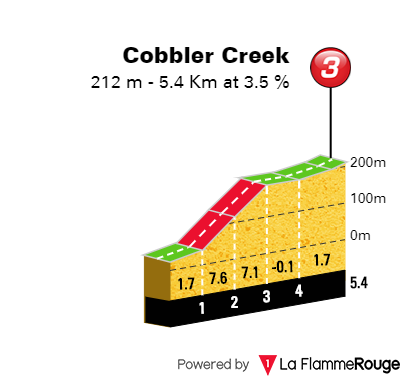 Third stage of the race that starts from the beautiful Nan Hai Pu Tuo Temple of Australia with a flat terrain where it will be shot near the sea so it could be windy. The stage hardly has difficulties until the km 113 where another slope of Cobbler Creek will rise that could cause cuts in the peloton. 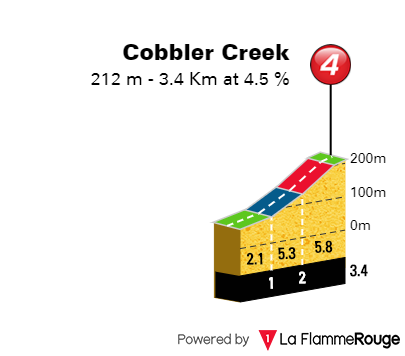 Medium mountain stage where we will have five climbs one of them second category where the race would begin to be decided among the men of general in the absence of the Willunga stage. 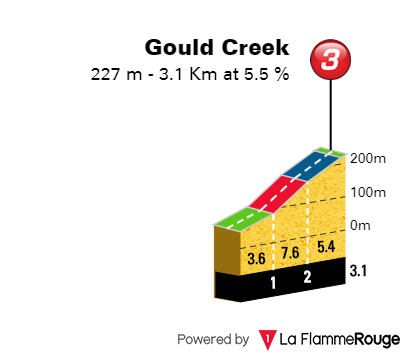 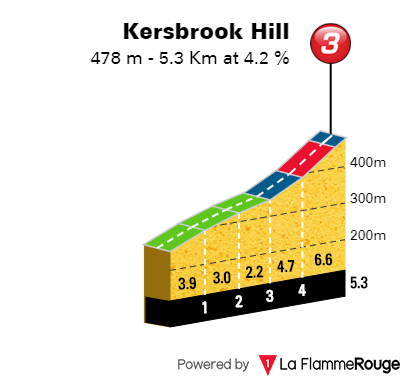 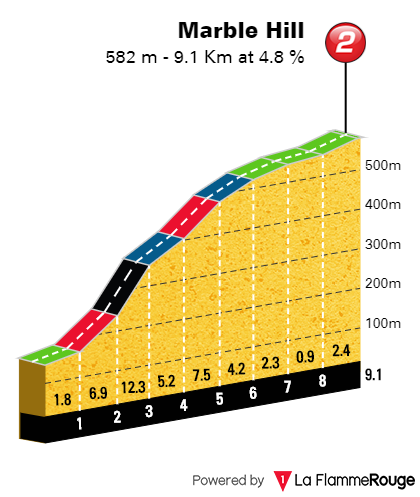 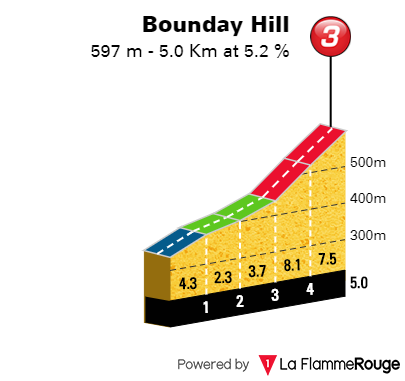 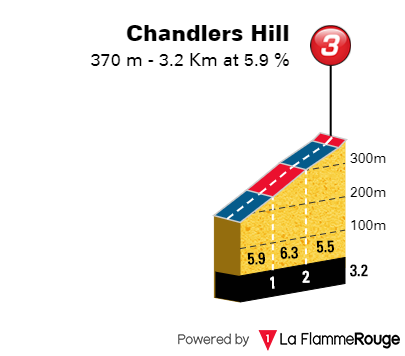 The queen stage of the race where we will have four steps to Willunga Hill that will decide the race if it comes tight. Also pay attention to the descent and bonus sprint.

The final stage with an urban tour through the streets of Adelaide where the start and finish will be located in Adelaide Convention Center North Terrace or Adelaie Casino where the teams after the stage could go to play roulette.

Thi is all and thank you for your time and read my tour.
Top 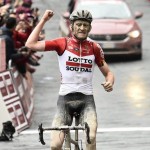 maps/tours/view/8142
Have no time for presentations, so I will only leave here the link of my tour.
Top