Compete in the contests and become the best stagemaker!
Locked
8 posts • Page 1 of 1

In this topic you can vote for the Battle of the North, according to the following rules.

1 - You have to judge the track according to the requirements: contests/contest-battle-the-north-t7413.html

2 - You have to write in a post your best FIVE routes, from worse to best, providing a brief motivation for each choice

Who can vote?
- Every user that submitted a contest (full points vote)
- Every user in the La Flamme Rouge Staff (Emmea90, Pigna, Sagan99, Matthorse, Nasdon33, Linkinito, Bose12)
- Every user that has registered BEFORE today and has at least 10 tracks in the editor. In this case, his votes counts half of the points scale

Don't really like the downhill finish after a plateau. And the stage before that one looks too hard. Shame there are only GC (climb/TT) stages after stage 5.

Not a fan of having two TT's. Not sure if the TT's balance out with the rest of the route.

Stage to Hafjell looks too hard. Shame, because all else is fine.

9/10 if we had to give points. First 9 stages are very good, but the last stage seems underwhelming. Would be great if the last mountain would be a bit closer to the final hill.

I really struggled to classify the Tour between them, especially in my top 5. The competition is getting tougher.

Great idea to place Legoland ! But I wanted to see a true high moutain stage.

Go through one of the best mountain stages I have seen in the contest. But the rest seemed a bit bland to me.

Your Tour is very nice. The last stage is original as fuck and change the vision I had of mountain stage. However, I don't think this is hard enough.

All of your stages are perfect. You're very close to the first place but I had to make a choice

The best. Well-balanced, well-drawned. I want to watch this race. Congrats on every stage, every transfert, everything in that race.

Hello everyone!
Here are my votes in this contest. The competition is very high, but I think I made the right decision.

I really like the different ending of the tour from Norway. The mountain stage was interesting and dynamic.

Interesting idea of a race without high mountains, which should allow many riders to compete in GC.

Again, a route where momentum will count. I'm a big fan of the gravel stage.
However, one strong uphill finish may be missing.

I love the last mountain stage. A real ordeal for the hardcore. Other than that, the whole race was flawless.

I think your route is the most interesting. It combines all possible difficulties and possibilities, therefore it is a race for real cycling omnibuses.
Top 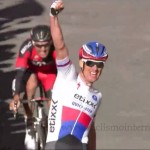 aubinrdo | 5th place
I like the last four stages. But I have the feeling that the first ones are just sprints where not much is going to happen and in a race of ten days I think you have to avoid boring days.

jibvalverde | 4th place
Very similar race to mine at least in the first stages. Balanced tour with a little bit of everything.

Belgian4444 |3rd palce
A little bit of everything without big mistakes. In my opinion there isn't a stage which is perfect but all the stages together make the race balanced and interesting.

davandluz | 2nd place
First five stages relatively easy and last five stages very tough to see the GC fight. It is impossible to make high mountain stages in Denmark or Sweden so good race with the mountains at the end.

5th benoît.guillot --> I don't like that only one stage passes through Denmark (zero bunch starts), the minimum number for one country was 2 in my opinion. I also don't like that the two "GC stages" are in the middle (maybe steeper climbs in Lillehammer would've worked better), leaving the last three days just for sprinters (in Åre, my guess is that no real gaps between GC contenders can be made, but it would end in an uphill sprint between puncheurs). The arrival in Falun is not practicable.

4th jajoejoe --> I think it's a good route, but there are some things I am not thoroughly convinced about. The last stage is a bit too tough in my opinion. I don't like the positioning of the ITT, it would've worked better in the first part of the race, and the Hamar stage as the last bunch sprint. 3 consecutive 200+ Km stages in this type of race ought to be avoided, though (and in stage 3 the riders come from a 2 hours and a half transfer from Denmark). Lastly, the descent after Julius Jepsens Vej in Vejle seems too dangerous.

3rd jibvalverde --> from stage 2 to stage 8 (excluding the time trial, which was an interesting idea), all stages are for sprinters (maybe different types of sprinters, but still). The last two stages are well designed, but in my opinion you could've worked harder to make a more evenly entertaining route.

2nd belgian4444 --> not convinced by Stage 8, it might've been better to end it in Hallbjønn. Regarding the tunnels, there might be too many in any case considering it needs to be televised, another location for the start of the last stage would have suited much better. Otherwise, it's a good entry.

1st Diego12Alpe --> you're the only one (with aubinrdo maybe) who presented a tour for classic riders, and I think you did it well. The Pigghaugen ascent should've been avoided, it's not safely practicable, but that's the only clear mistake.


Spoiler!
OTHER ENTRIES (in no particular order)
mauro --> not a really entertaining race in my opinion, only - a 5 Km climb followed by a 30 Km plateau is not likely to draw attacks, so the only real GC battle would be in the very last few Km of stage 8 and 10. The puncheur stages are all likely to end in mass sprints, too (if not with all of the peloton, with most of it surely). From Gol to Bergen is a 4 hours 40 minutes drive, surely you could've found something closer to Gol, regardless of your explanation.
lukkier --> too many ITT Km for a 10 days race, more than last years' Vuelta and TdF put together. First 5 stages are all for sprinters, except the ITT. Leave the "Golden Km stage" to the points race on the track.
JoostvandeBeek --> It's not a bad route, but the gradients are - except for stage 7, the only one certainly entertaining for the GC - never quite steep enough in the decisive points, and it's difficult to make a difference on passes located so far from the finish line, if most of the rest of the terrain is flat.
BETTO --> you should've drawn the route more carefully: the deviation to Oppegård in the Hamar stage is all on dirt roads; you chose super-narrow roads as descents in the Båstad one; perhaps most importantly, in the Hafjell stage you used dirt roads for descending from Liesetra. I like the profiles (even though the one of the last two stages would've worked better without a hilltop finish, maybe the Hajfjell one as it is already hard enough), but many of the roads you chose are not practicable.
weeloooo --> I think the finishes located all after a short uphill section are quite repetitive. I don't get the Fagernes stage to be completely frank. the Hirtshals circuit is not permitted by UCI rules, the Aarhus circuit is too short, as well. Last note: I think you mean flat for the first stage, but I guess it's a genuine mistake.
aubinrdo --> 5 flat stages in a row, then 4 rolling stages in a row. More switches of terrain would've worked nicely with keeping the entertainment level on point. The GC stages are not bad, maybe stage 7 and 8 are a bit too similar. I would've ended the Lillehammer stage at the Skistadion. What's with the Vaxtorp finish line placement?
Xander66 --> you chose to go to the highest point of Denmark (not considering other territorialities obviously), but the gradient is not enough to make the race interesting. Which can be the rest of the route, apart from the summit arrival in Norefjell.
Top