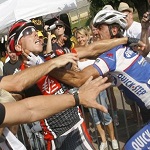 Past the Northern Classic with cobbled and cote, the attention is all for the "Giro d'Italia", wh ich will start from Netherlands, precisly from Apeldoorn, by now all the teams have communicated the riders will partecipate at the "Pink Race", who with ambition of winning and who some less. We at La Flamme Rouge will try to explain all the nuances of the Giro: from the Route to the favourites, passing through the possible surprises. 
Looking the route race can notice that is a route that favors the climbers, with five high mountain stages(Roccaraso, Sestola, Corvara, Risoul and Sant'Anna di Vinadio), a climb time-trial(Alpe di Siusi) and five intermediate stage(Praia a Mare, Arezzo, Cividale del Friuli, Andalo, Pinerolo). Good chance also for the sprinter, with eight stage(Nijmegen, Arnhem, Benevento, Foligno, Asolo, Bibione, Cassano d'Adda and Torino), but it will be very important the "Chianti Stage", a hill time-trial when the specialist can earn important minutes on non-specialists.
But another variant will be the weather: we know how in Italy we can pass from 30 degrees to snow even at low latitude, and the final stages in France not help the race. Is higher the danger of undo the stage for snow and, saw the precedent in the Tirreno-Adriatic(Monte San Vicino stage), RCS will have ready alternative stages. THE RACE
From the techincal point of wiew, there are three favourites: Vincenzo Nibali, Mikel Landa and Alejandro Valverde.
The favorite number one is Vincenzo Nibali; "Lo Squalo" searching his second victory at the Giro, and looking the race route, he may succeded, the long time-trial in Tuscany could earn him second on its rivals, and then defend in the mountain. Immediatly after there is Landa; the spanish rider is the best climber in the peloton, and he can attack the rivals on mountain stages, but he will have to defend in the time-trial, even if his the move to the Team Sky could have improved him in time-trial, and he will have to defend in the intermediate stage, where it is less talented than Nibali and Valverde.
The third favorite is Valverde: "Embatido" will partecipate for the first time in his career in the Giro, and after the victory at the Fleche Wallonne, he want to try to be a protagonist also in the Giro. It will leverage expecially on the experience and his great condition, that accompanies it for entire the season. One of the strenghts of the three favorites will also be the team, in fact Astana, Sky and Movistar will join at the three leaders gregarious of great value like Kangert, Fulgsangs, Roche, Nieve, Betancur and Visconti. THE SURPRISES
As every year before each competition, there is a list of names which could become the surprises in the race in progress, riders who ar not favorites at the start, but then they become thanks to their results.
One of these could become Ilnur Zakarin(Katusha): the Russian cyclist is the leader of his team, and comes from the 4th place in the GC at the Tour of Romandia, very good in the team trial and a good climber the Russian riders pointing to Top 5, but he has already shown to be able to climb with cyclists as Froome , Quintana and Contador.
Another suprises can be Domenico Pozzovivo(AG2R), the italian cyclist is still looking for his first career podium at the Giro and seems to have arrived to the last chance to conquer it. The unknowns are the same: it tends to fall over three weeks and lost precious minutes in the less difficult stages. In the time-trial is improved, but just to get to the top position?
Other possible surprises is another Russian cyclist: Sergey Firsanov(Gazprom) arrived this year to the newborn Italian-Russian team, and has become very competitive. This year he has already reaches the victory four times, including the Coppi&Bartali with 2 stage and the Giro dell'Appennino, in more he hit the Top 5 in the Giro del Trentino, by showing to stay in uphill with the best. Good climber and good and a good time trialist, he can point to a Top 10, but if he found a super condition it can be a loose cannon in this Giro
Ilnur Zakarin Greatest Fan
Top