since I'm from Germany it's pretty dissappointing not to have a bigger stage race in our country. Not that Germans wouldn't be into cycling at all, but apart from football the popularity of any sports depends very much on the success of German athletes. I think it's like that in most European countries, but it seems to be more extreme in Germany. So, after not having a stage race accross the country for ten years I was really excited about this relaunched version of the Deutschland Tour, and I am still. It is short, yes, but that's ok under the circumstances. It's not that easy to find host cities, people usually don't come to you, you have to go where they are (meaning urban areas), Germans are better in sprinting than climbing and at least there is the opportunity to extend the race to even 7 days in the next years (5 are to come 2022). That's still not much, regarding that they travelled 3 weeks through Spain at la Vuelta last year and only covered half of the country (and there is a 5 days stage race in small regions like Burgos, Wallonie or 9 in Switzerland, 5 wasn't even enough for Tour of Bavaria), but let's stick to what it is.

Still, the parcours could need some improvement from a sporting view, I think. In my opinion, a lot of stages ressemble each other to much, they travel about 160k through hilly regions from one city to another, do 2 hilly local laps and finish with a sprint of sometimes 4, sometimes 40 riders. And they leave out some nice opportunities - so from the start in 2018 I created a Tour of Germany each year, which I want to present to you in the following days or weeks, now that I found this Forum - and finally the opportunity to share my work of boredom and passion! You're invited to do your own Tours accross Germany, there aren't pretty much rules about it. The tour should be one for the classic riders, that's what the organisation always tells, but they have a MTF in the black forrest next year on top of a ~15k, 7% climb, so Politt or Stuyven eg won't do it

I just wanted to cover a lot of regions over the years and as much as possible within in one edition. Plus I wanted to create some variety and some development through the race, having a fight for the leaders jersey on most of the stages, with the possibilty of most stages to be the decisive one and a climax at the end. And of course, you need to have one or two pure sprinting stages, because Ackermann, Greipel, Kittel, Bauhaus... [edit: actually it would be better to say "opportunities for pure sprinters" instead of "pure sprinting stages" - on a 4-day-race nothing should be for granted and in 2/3 of Germany, if you go to the south it's almost impossible to create routes without some climbs. (But it's also nearly impossible to create really hard mountain stages like in the Grand Tours or Tour de Suisse, only a small part of the Alps is German or Bavarian, and passes like around Sella, San Gottardo or Huez and Maurienne-Valley don't exist here.)] My first edition from 2018 (I saved every GPS data on my Computer before I created some proper graphics with the LFR tools lately) will be uploaded soon and I would love to have some critcs, remarks or applause from the audience.

Greets, Möve (that means "seagull" and is the name of my local bicycle club, mind the "Ö" instead of the "O" in "move"

Let's start with the 2018 edition. Grand Depart is in Weimar, as it was important to me to include both eastern and western Germany in the race, and Weimar is a historical place. Goethe and Schiller lived here, in 1919 the first democratic constitution of Germany was adopted in the city. The first and the last stage provide an opportunity for sprinters, but riders have to master some climbs on the way to the finish. There are possibilities to attack, but athletes like Degenkolb or Matthews could possibly win all 4 of the stages in a sprint of a reduced bunch or a small group. Finish of the race is in Koblenz, also a historical place with two of the biggest german rivers, Rhine and Moselle, merging in the old town. Both Koblenz and Weimar proved to be interesting places for the race IRL as they hosted the race start in 2018 or will host the race start in 2022. On the way to Koblenz we pass big cities such as Erfurt (1st stage) and Nuremberg (2nd stage), travel through medium mountain regions of Thuringian Forrest (1st stage), Palatine Forrest (3rd stage), Hunsrück and Westerwald (4th stage) and have opportunities to do some sightseeing at the Buchenwald Concentration camp (some kilometres away from the route an 1st stage), Plassenburg, Bayreuth and Brombachsee (2nd stage), Hambach Castle (3rd stage) and Lorelei Rock (next to the parcours on stage 4). Every stage has a Bonus sprint for 3-2-1 seconds in the final and 10-6-4 seconds on the finish line. 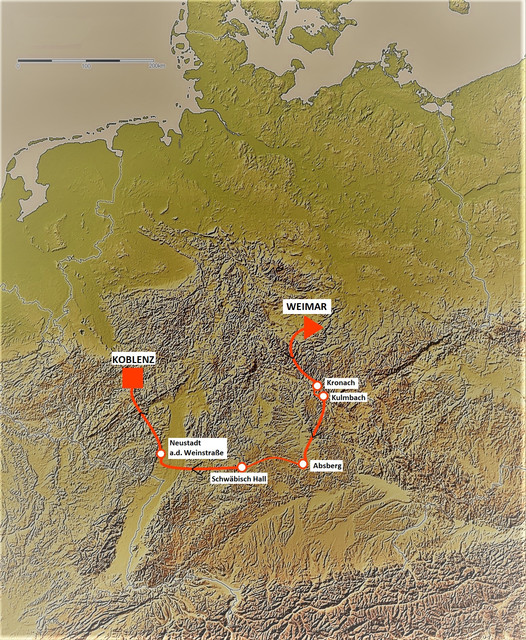 Stage 1 is 186k long, starts flat, ends flat, but has some serious climbs in the middle section. Not too hard - the worst is a 8,4k long but only 4,8% steep climb before the half, the climbs are done 50k before the finish. But riders can be distanced here and lose the race.

Stage 2 is the longest one with 207k, there are no hard or long climbs in it, but it is designed to create some small time splits on short, punchy climbs in the finale. The finish line is at the end of a 400m long and 12% steep climb just above the Lake, a reservoir inaugurated in 2000 called "Großer Brombachsee".

Stage 3 is designed to finally seperate the race favourites from the rest. After having a 170k long approach on the flat and small hills, two KOM on the final circuit (6,5k at 5,5% and 2,4k at 6,5%) plus a little kick to the bonus sprint after the last KOM and 5k before the finish could cause some damage. Those who stay in the front group and additionally made the uphill finish on the day before the quickest will head to the final stage in the race lead.

Stage 4 maybe is the easiest one of the whole Tour - relying on the hope, that riders try more with no stages left. However, it still has some opportunities for attacks in the local circuit in Koblenz, where riders have to tackle a 1k long and 9,5% steep climb, which is done twice. And not to forget: Even if you can't manage to get away, there are still some bonus seconds to grab at the top.
Top

Happy new year! I found some time to present the 2019 edition. It's pretty different compared to 2018, being a much more classical stage race with a MTF, an ITT and a totally flat stage. It's still made for allrounders, as the MTF is not too long and gaps can be levelled in the final ITT just like the sprint for bonus seconds could possibly still have an impact. The race was originally made to provide some opportunities for German riders like Schachmann, Buchmann and Geschke, although Schachmann to whom this race would have fit the best actually couldn't compete in the 2019 edition due to a crash at the Tour de France.

Start of the race is in Aachen, where in 1911 the first stage race ever in Germany finished (it was called "Quer durch Deutschland" and went from Wroclaw, which belongs to Poland nowadays, to Aachen in six days). The city of Aachen was once the capital of the Carolingian Empire, reigned by Emperor Charlemagne, the "father of Europe", and stayed one of the most important cities in Europe for a couple of hundred years afterwards. On our way from west to east we cross 5 German "Länder", including North Rhine-Westphalia, where 20 percent of the German population lives, and Berlin, in the same time capital and biggest city of Germany. We cross Rhine and Elbe, the largest rivers, pass the city of Kassel (stage 2) with the Unesco heritage of "Bergpark Wilhelmshöhe", the largest European hillside park, including castle Wilhelmshöhe, just as the Kyffhäuser monument (stage 3), errected to honor the first modern German emperor Wiliam I. And we climb up to Meißner, the mountain where Frau Holle is said to live. Nota bene: Frau Holle is a famous figure from a German fairytale who - according to the tale - is creating snowfall. And Wilhelmshöhe is named after the the Elector and Landgrave William of Hesse, while Kyffhäuser monument was errected to honor William of Hohenzollern, Emperor of Germany, who was born 50 years later than William of Hesse. Well, still pretty much monarchy around here in Germany - but let's stick to bike racing. The profile of the race is shaped by the Uplands of Sauerland, Meißner, Kyffhäuser and Harz. 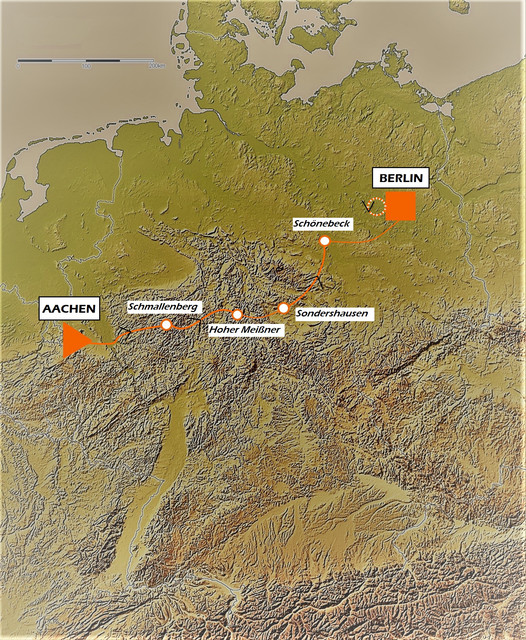 Stage 1 is the most unpredictable one in this years race. It's 217,5k long and crossing North Rhine Westphalia for almost its total spread from west to east. After a hilly start the stage eases in the Cologne region. In the final, the race becomes tougher again, taking some climbs in the Sauerland. Attackers maybe have some chances here, while the climbs shouldn't be to hard for the majority of the sprinters. After 30 merely flat kilometres before the finish, the last kilometre in Schmallenberg rises with a gradient of 4% to the line.

Stage 2 is the queen stage and a real MTF. It's 182k long, starts hilly, doesn't have much opportunities to catch a break, including seven KOM and a tough final in Hesse. The two ultimate climbs average above 8% for more than 4k, so this day is really one for the climbers. I would consider the final climb to Hoher Meißner in the same category as La Planche de Belles Filles, a bit easier maybe.

Stage 3 has some climbs after the start, but should end in a bunch sprint. We reach eastern Germany, starting in Thuringia and finishing in Saxony-Anhalt, crossing the eastern ends of the highland area Harz and Bernburg, a small town with a Castle and a memorial for the Nazi era. After 157k and two flat laps the race ends in Schönebeck, not far from the city of Magdeburg.

Stage 4 is an ITT to finish the race. 15,5k long and totally flat, the riders start and finish in Berlin, next to the Brandenburg Gate. They also pass Victory column, Kurfürstendamm, Zoo or Tiergarten.
Top
Post Reply
3 posts • Page 1 of 1